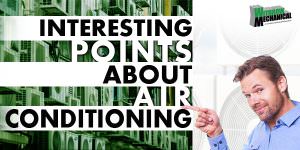 Aaaaaah! Air conditioning! We tend to take it for granted until it stops working. Here are some interesting snippets of knowledge about air conditioning that may have you looking at this luxury in a different way.  When air conditioning first came on the scene the measurement used for its output was called “ice power”.

This let the user know how many blocks of ice were needed to produce a cooling effect. Air conditioning evolved from using blocks of ice, to using fans, to running off electricity and the first home that was built fully air conditioned was in Minneapolis in 1913. This was a huge luxury for the time period, but unfortunately the owner of the mansion passed away before he could enjoy the house. Now, up to 88% of new family homes built in America are built to include air conditioning.

The first American president who made air conditioning a priority was Herbert Hoover. At the beginning of the Great Depression he spent around $30,000 to cool off the oval office. By the 1940’s the average cost of installing an air conditioner was around $350.00, this was expensive back then! Nowadays, factoring in inflation, that same cost is around $3500.00. By 1939, consumers could purchase air conditioning as an upgrade for the family vehicle.

It wasn’t very affordable for the average family, but also was not very popular because the A/C equipment took up most of the room in the trunk. One last interesting point is that air conditioning does more than make us comfortable and productive, it can save lives, especially those of children, the elderly or the sick. The rising use of A/C systems means that the chance of dying due to overheating in the summer has dropped a whopping 80% over the last 50 years.